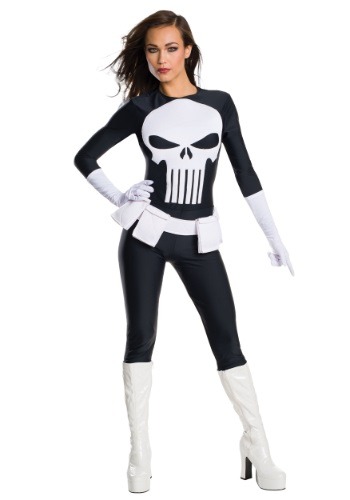 Why should should bad guys get your mercy? After all, they would never show you any mercy and they're the type of baddies that would come into your neighborhood and stink up the joint with their villainous plots and nefarious activities without a second thought.
Yes, it takes firm action to put those criminals in their place.
It takes a ruthless attitude to clean the streets of your city.
It takes...a really awesome Punisher costume to run those bad guys out of town!
Why? Because the Punisher never shows the bad guys an ounce of respect after what they did.
If you want to be a ruthless anti-hero, you definitely want to emulate Frank Castle.
This Womens Punisher Costume brings you the finest in villain vanquishing attire.
Based on the Marvel Comics anti-hero, the form-fitting jumpsuit comes with the deadly skull symbol designed right into the front, so you can start your foray into the superhero game with a bang.
The belt comes with pouches on it, so you can look ready for a fire fight no matter where you are, whether that's the crowded streets of New York City, or just at a costume party.
Just make sure that you come armed to the teeth, since those baddies (or other costume party goers) won't go down without a fight!