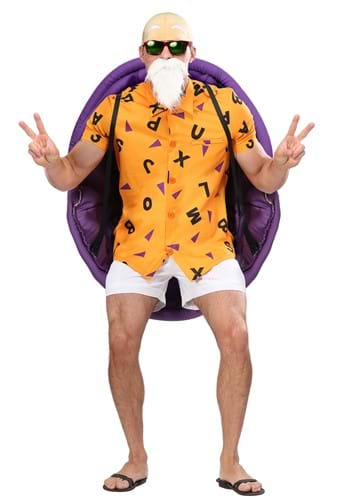 TEACHER IN A TURTLE SHELLBefore Goku went Super Saiyan and before he was exchanging blows with Frieza, he was just a young brat with a monkey tail and a slightly tougher punch than your average kiddo.
Master Roshi molded that kid into the high-powered warrior that he is today, so you could argue that all the victories Goku won are Roshi's wins, too.
Training Goku may be his crowning achievement, but that's just one of his many accomplishments over the years in the Dragon Ball Z series.He invented the Kamehameha Wave, the most important technique in the Z Fighter's repertoire.
He won the 21st World Martial Arts Tournament under the guise of "Jackie Chun." He effortlessly defeated a whole legion of Red Ribbon Army soldiers.
Really, his only failing is his luck with the ladies, but we're pretty sure that they haven't stopped to look at how spectacular his style is!
After all, who else can make wearing a turtle shell look fashionable?DESIGN & DETAILSIf you want to step into the role of Akira Toriyama's legendary character, then it's time to wear this Dragon Ball Z Master Roshi costume.
Our own team of designers spent a month in the hyperbolic time chamber to perfect this super look.
This officially licensed costume comes with everything you need to become Roshi.
This shirt is a button up style and has a unique print with letters and triangles.
The shorts are a cuffed, casual style, perfect for chilling on the beach or fighting deadly foes.
It comes with a bald cap with appliqued eyebrows, since we all know that the Turtle Hermit is naturally bald.
The goatee is made of a thick, faux fur material and will require double-sided tape or spirit gum to apply to your face.
Finally, sport these dark sunglasses and the foam turtle shell to start your training!CALL THE OTHER DBZ FIGHTERSYou've had a long life of hard work.
It is time to relax.
What better way than to hit the beach and set up a lawn chair!
Of course, the baddies are bound to appear.
Just know, if they do, all the other fighters owe you.
Just order them around.
That's your right as Old Man Roshi — and the ability to command the other DBZ characters is the true ultimate power!