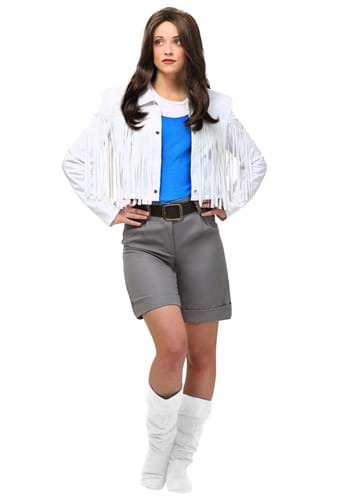 Ferris, please.
You've gone too far.
We're going to get busted.
- Sloane PetersonBeing Ferris Bueller's girlfriend is both exciting and a little bit worrisome.
Sloane is a pretty laid back kind of gal but sometimes even she gets a little paranoid that Ferris is going to get caught and the whole gang will end up getting into trouble.
For example, Sloane was a little nervous when her boyfriend tried to eat lunch at a fancy restaurant by impersonating Abe Froman, the sausage king of Chicago.
The snooty waiter almost busted them but Ferris' cool, calm, and collected demeanor helped them to steal Froman's reservation.
Of course, Sloane was right by her boyfriend's side through the whole ordeal and her suave telephone skills helped them to land the phony reservations.
Ferris Bueller may be one cool guy, but Sloane is definitely the coolest girlfriend ever!Our exclusive Sloane Peterson costume will turn you into one of the most awesome female movie characters from the '80s.
You'll look exactly like Bueller's main squeeze when you wear the white fringed jacket.
The vintage-style shorts are comfortable and stay cinched together with the help of a black belt.
The blue undershirt adds a pop of color to this officially licensed Ferris Bueller's Day Off costume.
No matter what crazy shenanigans you end up getting into, just keep in mind that getting caught is just not an option.
So what are you waiting for, take the nearest Ferrari on a little joyride or something!