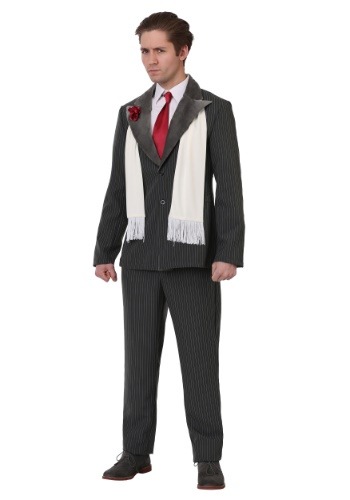 So, are you bad or not?Maybe all Gangsters weren't that bad, really.
You know, the types who were just out hustling for a little extra moolah.
Some most certainly were, though.
Like, serious bad guys.
You know the type.
Tommy gun in hand, ruthless, and no mercy.
We wouldn't say we admire them but we will admit that they are a whole lotta fun to portray in costume.
Because it's always more fun to be a bad guy!Suit up as the most notoriously vicious mobster to be found when you suit up in this Men's Vicious Gangster Costume.
Designed right here in our own costume studios, we wanted to add another exemplary example of mob costumes that are a perennial Halloween hit.
And this costume does the trick!
Deck it out with a few signature accessories, and you'll be ready to be a full-time mob boss!Design & DetailsThis Men's Vicious Gangster Costume is a Made by Us costume, exclusive to HalloweenCostumes.com.
And it's got some signature style, and serious attention to detail.
Styled as a jacket and pants combo, it also comes with a white scarf.
The other accessories we have it pictured with are sold separately.The jacket is styled like a suit jacket, with wide lapels and white pinstripes.
The pants match, and the white scarf pulls the whole outfit together.
A fedora might add the perfect touch, too, so pick one up, and maybe a plastic Tommy gun, too, if you're so inclined.
(Accessories sold separately.)A real Vicious GangsterSo, when you've got the itch to make a little of that black market moolah, we're sure you'll be ready for the part in this costume.

Become a Vicious Gangster this Halloween, and you'll be ready for a Halloween crime spree!