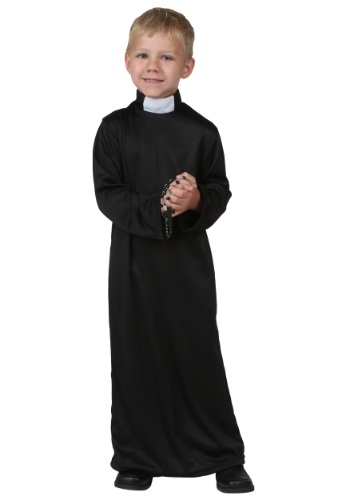 Itâ€™s really difficult to get into the priesthood.
Thereâ€™s more commitment in that than anything we can think of.
You have to stick to the religion like glue, and then memorize more saints than there are constellations in the sky!
Not to mention those scary exorcisms you have to do!
Itâ€™s not really for us, and weâ€™re sure most adults probably arenâ€™t pure of heart enough to take up the cloth either.
Thatâ€™s why we might have a solution of sorts.
Maybe your kid has been awfully kind hearted to the poor as of late.
Heâ€™s barely taller than the giant pot they use for the soup, but heâ€™s always volunteering at the kitchen for the homeless anyway.
Youâ€™ve seen him reading the Bible more than he watches cartoons on Saturday morning, and heâ€™s been the one waking you up every Sunday morning for church.
Sounds like he might be just the person weâ€™re looking for to be standing up on the pulpit.
Now, before you think weâ€™re going a little crazy, did you know that the youngest pope, Benedict IX, was eleven years old when he became the great monarch? Now youâ€™re starting to look at your kid like he might be just what this world needs, and for once weâ€™re not talking about superheroes.
There just seems to be one thing missingâ€¦ Of course!
He canâ€™t be running around the church in a t-shirt and jeans he got from his big brother.
Weâ€™ll have to outfit him with the latest fashion sweeping the priesthood.
Weâ€™re not exactly sure where the other members of the clergy go to get their robes, but weâ€™re pretty sure they wonâ€™t have anything that will fit your little guy.
Thatâ€™s why we took inspiration from the real deal, and shrank it down to just the right size for your toddler.
Now if only we can convince him to do weddingsâ€¦he still thinks theyâ€™re pretty gross.