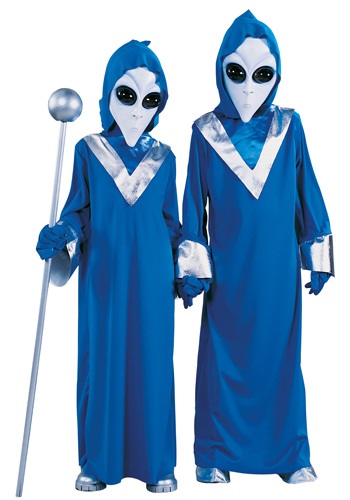 Some people fear vampires, werewolves, and zombies because those creatures all act with their primal and most basic instincts… usually hunger.
No one wants to be eaten alive or sucked dry, so yeah, we understand that.
However, we think there is something even scarier.
Aliens!
Life forms from the depths of outer space that have superior intelligence as well as technology more advanced than we could fathom.
If they were to visit Earth, would they come in peace? Maybe.
Could they sell the human race into slavery around the universe and drain the planet of its resources? Oh, most definitely!Grab this Child Space Alien Costume for your kiddo and let him spread terror this Halloween.
The easy to slip-on hooded-robe, matching pair of gloves, and extraterrestrial mask will hide any evidence that your kiddo is just another human.
He’ll look just like an all-powerful leader of an alien race with this galactic guise on.
Now, the question is did he come to this planet to trick or to treat this Halloween? To trick, of course!
Have your youngster stand at your neighbors’ front doors, without saying a word, simply staring at them with the dark, soulless eyes painted on the plastic molded mask.
You can bet that they’ll start to wonder if the alien invasion has begun.
Then have yourself a laugh when you jump out from stage left yelling “Take us to your leader!” (Whether you’re dressed up as an alien as well is up to you… but we can help with that too.)If you want to give your little one an out-of-this-world Halloween or ensure his safety during an actual alien invasion this Child’s Space Alien Costume is exactly what you need!