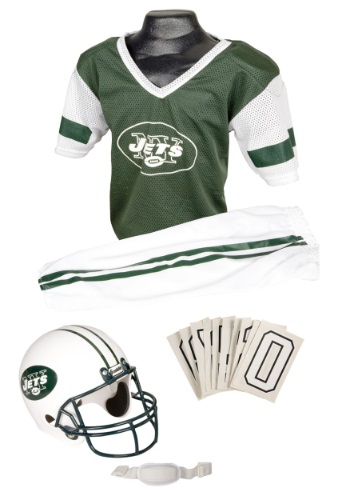 The New York Jets are the first AFL team to win a Super Bowl.
Up until then the Packers had won every single Super Bowl -- both of them, to be more precise.
The Jets beat the Colts in Super Bowl III to break Green Bayâ€™s then seemingly unstoppable winning streak.
That was a true game changer!
In addition to being from New York (also known as the â€œEmpire stateâ€ and the â€œonly state that really mattersâ€), the Jets are also fortunate for always having a great uniform.
Back when they were just starting out and called the Titans their colors were blue and gold.
Their original uniformâ€™s design resembled Notre Dameâ€™s, largely owing to the Titansâ€™ original owner Harry Wismerâ€™s fondness for the Fighting Irish back then.
They changed their name to the Jets in 1963 and took up their hunter green and white colors then as well.
This color change was highly advisable -- it does a much better job of hiding grass stains!If youâ€™re known to sport green and white in support of your favorite team, then you canâ€™t do much better than going the whole whole nine yards by wearing their whole uniform to the next game or costume party!
Our officially licensed NFL Jets Uniform Costume comes with the Gang Green jersey itself, striped pants, helmet, and iron-on numbers so you can wear your number or your favorite playerâ€™s.
Just be sure to stay on the sidelines when youâ€™re wearing this or Todd Bowles might actually put you in the game!